Stand on top of the Rock and you feel as if you were on top of the world. Europe is at your feet. Africa fills one horizon, while the gates to the Mediterranean and the Atlantic are on either side.  The journey to the top of the Rock rewards you with a truly breath-taking view. From a height of 1400 feet (426m) you will see the African coastline, where the waters of the Atlantic meet the Mediterranean, Spain’s Costa del Sol and a panoramic view of the city far below, the quays, marinas and bays.

This green area of Gibraltar is home to many of its attractions and is therefore a main highlight for the visitor with an interest in visiting the major attractions to marvel at the fantastic views, and for ramblers wanting to walk through its nature trails. No unauthorised private vehicles are permitted in the Reserve. However, one may visit as a pedestrian, taking a lift on the Cable Car, or by taking a guided taxi or bus tour. Historically, it is likely that the original vegetation found throughout the Upper Rock was woodland and this was destroyed over the centuries by tree felling and extensive goat grazing.  Following the removal of goats during the 19th century, maquis or mattoral became the dominant habitat type on the Upper Rock.

The Gibraltar Nature Reserve has evolved and developed significantly since the Upper Rock was officially designated as a Reserve in 1993. As part of the continued effort to further protect biodiversity and natural habitats in Gibraltar, the then Upper Rock Nature Reserve was rebranded and its size extended in 2013 to include new areas that would further help protect important habitats and species.  The British Garrison has historically maintained a strong presence on the Upper Rock, and before WWII, defensive batteries were constructed on most promontories on the Rock for the protection of ‘Fortress Gibraltar’.

In 1938 the Rock’s defences were strengthened against the possibility of a land attack, particularly those facing north.  Defensive guns can still be seen at Princess Caroline’s and Princess Amelia’s Batteries.  Large 9.2 inch guns were also placed at the southern end of the Rock to defend the Strait of Gibraltar. These still stand at O’Hara’s and Lord Airey’s Batteries.  Numerous anti-aircraft batteries and searchlight emplacements were also built during this time and these can still be found in different parts of the Upper Rock.  On the advent of WWII, this area became a total exclusion zone to the resident population. It was demarcated by an ‘unclimbable fence’.  Soon after the war, the Upper Rock was again opened to the public, but only during daylight hours.

The Gibraltar Nature Reserve is also renowned for its unique trails that meander through the extent of the Reserve.  These combine the Nature Reserve’s natural beauty and stunning views with some sites of historic interest that do not feature widely as part of the more mainstream ‘Rock tours’.  Notable trails include Mediterranean Steps, Inglis Way, Royal Anglian Way and Douglas Path.  Four trail networks have been developed, namely the ‘Nature Lover’, the ‘History Buff’, the ‘Thrill seeker’ and the ‘Monkey trail’.  Each trail has its own logo to help guide the user.  As part of the revamped trail network a new Gibraltar Nature Reserve Application (GNR App) has been developed which is available on iTunes and Android platforms. 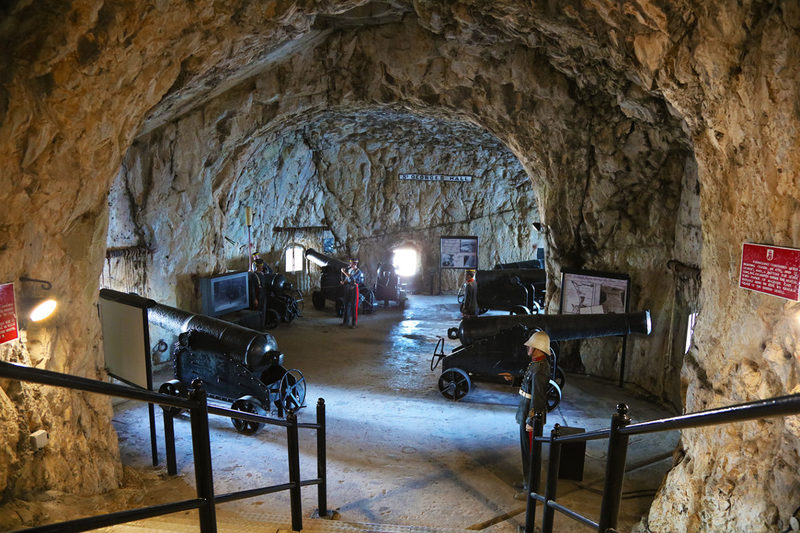