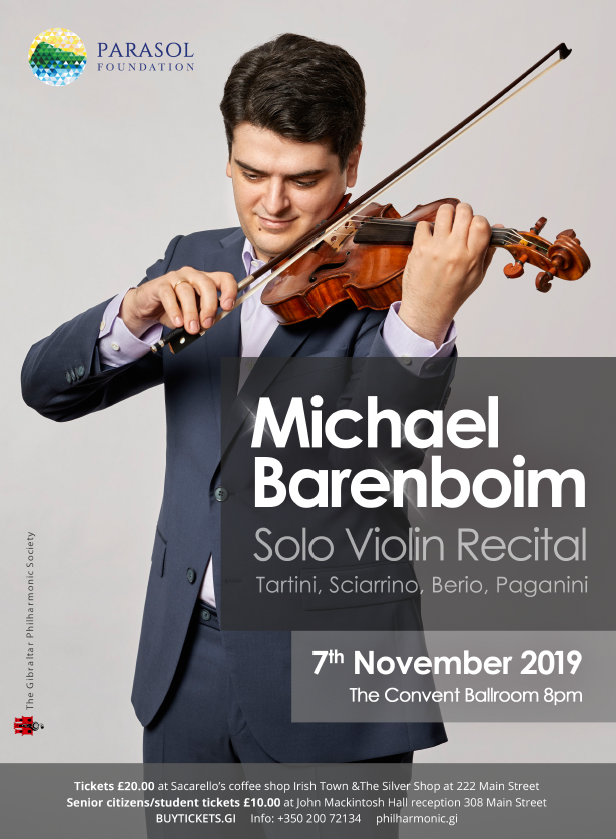 The Gibraltar Philharmonic Society is delighted to present Michael Barenboim, one of the most versatile and talented artists of his generation in concert on 7 November 2019 at the Convent Ballroom, Gibraltar at 8pm. The concert is organised on behalf of The Parasol Foundation Trust.

Michael Barenboim lets music, in its diverse and enduring ways, speak for itself through his violin. His performances are praised by the critics as “stunning”, “exciting, “utterly persuasive and breathtaking.”

Committed to the core classical and romantic repertoire, he is deeply invested and specially recognized for his performances of the 20th century and contemporary repertoire.

Barenboim celebrates a long history of collaboration with the late Pierre Boulez, whose pieces he regularly performs in recital and with the Boulez Ensemble. He has recorded both Boulez’s Anthèmes 1 & 2 on Accentus Music.

His second solo recording, presenting works by Sciarrino, Tartini, Berio and Paganini, was released in January 2018 and hailed by the critics as “visionary programming” (BBC Music Magazine), “breathtakingly compelling, and one that’s full of brilliant revelations” (The Strad).

Parallel to his solo concert and recital performances, Barenboim also serves as concertmaster of the West-Eastern Divan Orchestra and cultivates a continuous and strong involvement in educational activities. He is Professor for chamber music and violin at the Barenboim-Said Academy, in which he heads the chamber music department, and gives master classes around the world.

Tickets priced at £20.00 are available from Sacarello’s coffee shop – restaurant in Irish Town and The Silver Shop at 222 Main Street or online at www.buytickets.gi

A limited number of tickets at £10.00 are available to senior citizens and students via the John Mackintosh Hall at 308 Main Street. Further information on + 350 200 72134 or www.philharmonic.gi